Republicans spent tens of millions of dollars in 2020 to keep Democrats from painting more of Texas blue. Now, the GOP is trying to fireproof its districts with a new map that contains the suburban damage they’ve suffered.

The Texas state Senate is on the verge of releasing new congressional lines that could very well determine the balance of power in the House for the next decade. While the precise boundaries are still being finalized, the new map is likely to shore up all of the state’s GOP incumbents by packing Democrats together in three new deep-blue seats in the biggest metro areas: Austin, Houston and Dallas, according to several sources close to the redistricting process.

The end result is likely to give Republicans control of at least two dozen of the state’s 38 districts — but it is not expected to significantly reduce Democrats’ footprint, which grew slightly over the past 10 years. That’s a far cry from the ruthless redistricting happening elsewhere — but also a realization of the GOP’s already maxed-out advantage in Texas.

“We’ve got a united map we’ve all agreed to,” Rep. Roger Williams (R-Texas) said of the state’s Republican delegation. “It makes it easier when we’re united — it doesn’t happen too often.”

The redistricting comes at a crucial moment. Texas has been at the center of two of the biggest trends in American politics: Democrats’ increasing appeal in affluent suburbia, and the rightward shift among certain segments of Latino voters. The remap offers Republicans a much-needed reset, after they watched a chunk of once-safe seats turn into battlegrounds in the last few years.

The new map will allow the GOP to slice up the rapidly diversifying suburbs while also leveraging its new strength in the Rio Grande Valley to create potential new pickup opportunities and boost the GOP’s chances of flipping the House next year. Sources stressed that though the congressional delegation in Washington is all on the same page, Republicans in both chambers of the state legislature could tweak the map before and after it’s officially introduced as early as this week.

But the nature of Texas’ population eruption over the past decade creates limits — both demographic and geographic — on how far Republicans can go in pressing their partisan advantage. Texas is gaining two districts in reapportionment, more than any other state. Yet virtually all of Texas’ population growth came from nonwhite residents, and the exploding areas of the state are generally around major metro areas, which have been racing toward Democrats.

“If they get greedy, they’re going to hurt their own people,” said Rep. Vicente Gonzalez (D-Texas). “There’s nine seats that need shoring up and two new ones. If they go beyond that, they’re going to be losing seats over the next decade.”

In fact, the incumbent in the greatest redistricting peril is probably Gonzalez, whose South Texas seat is likely to become much more competitive — and perhaps even Republican-leaning.

“Clearly I am,” Gonzalez said when asked if he was a Republican target in redistricting. His GOP friends in the legislature have warned him, he said.

Republicans began the last decade with 24 of the state’s three dozen congressional seats. For the first few cycles, the only truly competitive seat was a sprawling West Texas district that encompassed 800 miles of the U.S.-Mexico border. But by 2018, Democrats were able to wrest control of two suburban seats in Houston and Dallas that were longtime GOP strongholds. And by 2020, both parties were spending in over a half-dozen others.

To protect those members, GOP mapmakers are expected to effectively cede the two districts they lost in 2018, packing the Dallas seat of Democratic Rep. Colin Allred and the Houston seat of Rep. Lizzie Pannill Fletcher with Democratic voters from surrounding areas. And Texas legislators are expected to place a new heavily blue district in the Austin area for the same purpose. 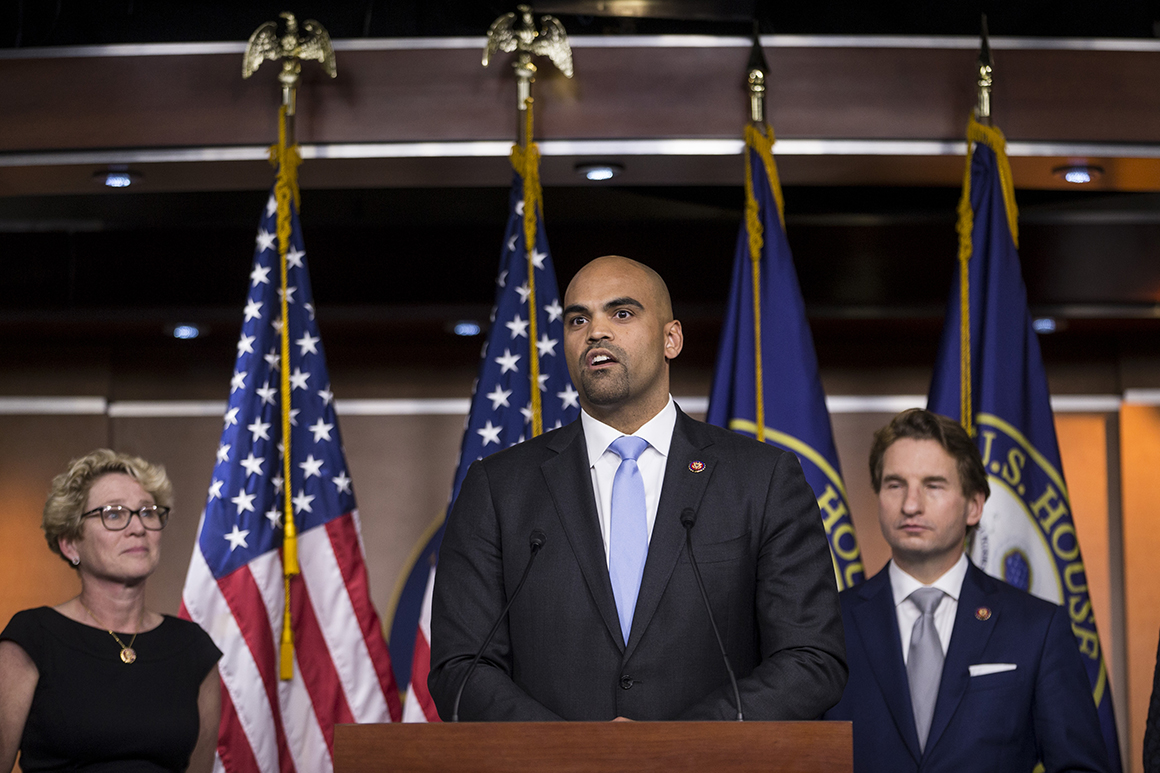 A second new seat will likely be added in the Houston region, and it will favor the GOP. Republican Wesley Hunt, who narrowly lost to Fletcher in 2020, is likely to run there.

And for additional cushioning, they can pull from ruby-red seats in the Texas Panhandle, the Hill Country and along the state’s eastern border.

“Everybody knows you’re gonna have to give stuff up, and some people are gonna get things,” said GOP Rep. Ronny Jackson, who represents the most Republican-leaning seat in the state, where Trump beat President Joe Biden by 60 points. “In particular I’m an R+33," he added, referencing the district’s Partisan Voter Index. "So I just walked into this knowing like I’m giving up a lot, you know? I mean, I’m not gonna be an R+33 anymore — there’s just no way.”

Republican strategists feel confident they won’t lose any incumbents in 2022, but it’s hard to predict with certainty how any district will perform in 2024, or all the way through the 2030 midterms.

They’re making a bet that three new deep blue seats can siphon enough Democrats away from the surrounding areas to protect a dozen or so GOP incumbents — and that Democrats’ gains in the suburbs have plateaued. And there’s some reason to think that’s the case.

Though Trump’s vote share in Texas lagged badly behind other recent GOP presidential candidates — including his less-than-6-point victory last year — the rest of the party’s ticket out-ran him, giving Republicans confidence that Texas isn’t turning purple any time soon.

And Republicans in the state are also banking that their Trump-fueled surge in the Rio Grande Valley will continue without the former president on the ballot. The three districts in the region saw the biggest shift to the right in 2020, and Biden carried them by only a few points.

Gonzalez had the closest shave, winning reelection by 3 points. But his neighbor, Democratic Rep. Filemón Vela, is retiring, and he hasn’t ruled out running in the new version of Vela’s district if that looks more favorable.

In an interview, Vela said it would be fairly easy for Republicans to draw at least one more favorable seat in South Texas. Trump may have been an anomaly, he said, but there are other reasons why the GOP might be ascendant.

“I think Trump’s showmanship probably drove a lot of the support that he had,” Vela said. “But then the socialist wing of our party is hurting Democrats with the Hispanic vote in South Texas, without a doubt.”

It’s unclear how aggressively Republicans will target South Texas, according to interviews with party strategists. They could attempt to create a map with multiple competitive districts or perhaps one strong Republican seat.

In interviews, members of the state’s GOP delegation described their redistricting meetings as drama-free. McCaul — who won reelection last year by 7 points even as Trump carried his district by less than 2 — is the delegation’s point person for redistricting, and the members in deep-red seats seemed eager to share some of their friendly voters.

“Some of those folks, you know, moving one neighborhood could make a difference,” said Rep. Louie Gohmert, who represents a solid GOP district along the eastern border of the state. “But what I told the delegation was: ‘Just don’t move me into Louisiana, and I’ll be okay.’”

Things were looking up for Bill de Blasio. Then crises started piling up.