A New Democrat Administration and Renewed Punishment of American Citizens 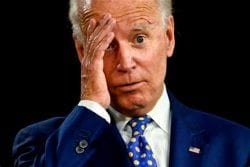 Former President Donald Trump made a sharp and important point when he stated that each nation is responsible for the safety and welfare of its own citizens, and he intended, as president, to make America great, prosperous and livable again for the benefit of it‘s own citizens.

He kept his word and made America energy self-sufficient while keeping non-Americans from crossing our southern border to take jobs that Americans need, as well as to keep those who might be criminals from attacking American citizens. He brought businesses back to America, thereby growing employment and reducing unemployment and making America more comfortable and wealthy again, until the Wuhan covid disease halted his miraculous transformation from the dregs of the Obama recession.

Now that Joe Biden has had a few days in office he has already issued executive orders that have halted and reversed Trump’s progress toward a great America. Biden’s handy work has killed thousands of jobs on the Keystone XL pipeline. He’s ordered that no illegal trying to cross our border be halted in any way, so the hoards of people coming north from Honduras will be in Arizona and California in a couple of weeks, and one bets that Biden will let these invaders in and help them settle in America and be anointed with citizenship almost immediately.

The renewed relaxation of relations with Iran, and Biden’s order to rejoin the Paris Climate Accords have not caused any pain or suffering yet, but they will when the anti-America United Nations cabal along with America‘s own Socialist-left agitators, begin to implement their Green New Deal, and the people who will be hurt will be American citizens, along with Israelis who are in Iran’s terrorist sights.

Never in my life could I have envisioned such a dire situation and such a callous president, that the first things he would do in office is inflict pain on American citizens. But this president has done just that, and I fear that poor old Joe is so disconnected from reality that he may not even realize the harm he’s doing to his own citizens. I believe that Kamala Harris and her radical staff have simply placed the executive orders in front of Biden, given him a pen and a short speech to read as he signed the orders, and the documents were signed without his personal knowledge of what he was doing.

Even if he is unable to think and make decisions rationally for himself, he’s the president and he’s responsible for these crimes against America. The people who supposedly love Joe Biden yet encouraged him to run for president in his current uncertain state of mind, have placed this addled gentleman in a position that can only cause his eternal ridicule, and his illogical thinking and confused statements forebode this bad situation.

This is a tragedy that has only begun to unfold as Americans watch in horror as their nation is attacked by radical, leftist Democrat politicians, and there are still four full years left for the Biden administration to do more, and more lasting, harm. All thinking Americans must call or email their national House and Senate legislators and demand that they force a halt to this administration, and we can only hope that decent, patriotic Democrats will also place pressure on the White House to stop Joe Biden from doing even more harm to America.

A New Democrat Administration and Renewed Punishment of American Citizens is original content from Conservative Daily News – Where Americans go for news, current events and commentary they can trust – Conservative News Website for U.S. News, Political Cartoons and more.