California politicians skewered for social crimes in the age of coronavirus

OAKLAND, Calif. — California politicians are drawing scorn for the unthinkable: dining out, spending Thanksgiving with relatives and traveling out of state.

Such malfeasance is considered the height of hypocrisy during a pandemic in which leaders have discouraged a long list of social activities. Few places have as many errant officials as California, a deep blue state with some of the strictest rules in the nation — and where politicians have wagged their fingers this fall in an effort to control surging infections.

Just this week, San Francisco Mayor London Breed was shamed for attending a November dinner party for eight at the luxurious French Laundry, the same Michelin 3-star restaurant that drew California Gov. Gavin Newsom to a lobbyist’s birthday bash the night beforehand. San Jose Mayor Sam Liccardo had to admit he was part of a five-household family gathering for Thanksgiving, a high social crime in the ever-strict Bay Area.

The reveals couldn’t come at a worse time for leaders whose best shot at curbing coronavirus spread is convincing the public to stay home. California leaders have been unwilling to resort to the strict enforcement methods seen in Europe and Asia and have acknowledged that social pressure is their only weapon — one that has been seriously undermined by each meal with friends and family.

The public has grown furious watching political leaders make the rules and then blatantly break them. Suddenly, a politician’s worst nightmare is no longer the headline about the affair or the sex tape. It’s getting spotted at a restaurant or a packed party.

"After all these months of a pandemic, most people aren’t in a slack-cutting mood," said Jack Pitney, a former operative for the Republican National Committee who teaches politics at Claremont McKenna University. "When politicians are acting in ways that look inconsistent with their policies, people don’t have a lot of patience anymore. It’s a reminder that these days the personal is political."

Los Angeles County has struggled to contain the virus all year, and the current wave has especially alarmed local officials. The nation’s largest county, with 10 million residents, has banned gatherings for non-essential purposes and prohibited all dining at restaurants, some of the strictest measures anywhere in the United States. Supervisor Sheila Kuehl was eviscerated in the public arena because her meal came just hours after she voted to pass a ban on outdoor dining. Though the ban wasn’t yet in effect during her meal, the act upset voters who not only showed up on her doorstep but viciously flooded her with criticism on Twitter.

Elsewhere, the social violations are piling up.

Last month, New York Gov. Andrew Cuomo had to disinvite his 89-year-old mother, Matilda, from attending Thanksgiving dinner after he faced a backlash when he let slip his plans on the radio. Denver Mayor Michael Hancock had to "humbly ask" for forgiveness after he discouraged residents from traveling for Thanksgiving, then flew to Mississippi the same day to be with his family. And Austin Mayor Steve Adler apologized Wednesday after telling constituents to "stay home" — from a family timeshare in Cabo San Lucas, Mexico.

The poster children are almost always Democrats. That doesn’t mean Republicans aren’t dining out and flying out of state, considering a bipartisan stream of California lawmakers flew to Maui for a conference with lobbyists last month despite a travel warning. But Democratic leaders have generally taken the lead in admonishing residents to stay home. Republicans have called for fewer restrictions on activities and have defended their private behaviors as aligned with their beliefs, as was the case throughout the pandemic on mask wearing.

White House Press Secretary Kayleigh McEnany on Wednesday seized on the growing parade of California Democrats who’ve been dining out under what she called "rules for thee, but not for me." The most notable example has been Newsom, who still can’t shake the stain of having attended a packed and tony French Laundry dinner with lobbyist friends.

He finally got company this week in California.

In San Francisco, Breed’s office confirmed she dined at French Laundry last month in a party of eight, a meal first reported by the San Francisco Chronicle. Her excursion did not violate any restrictions at the time — it came before Napa County, where the restaurant is located, or her own city had clamped down on indoor dining. But the optics of the scene, revealed in the midst of California’s worst surge of the pandemic, were damaging. 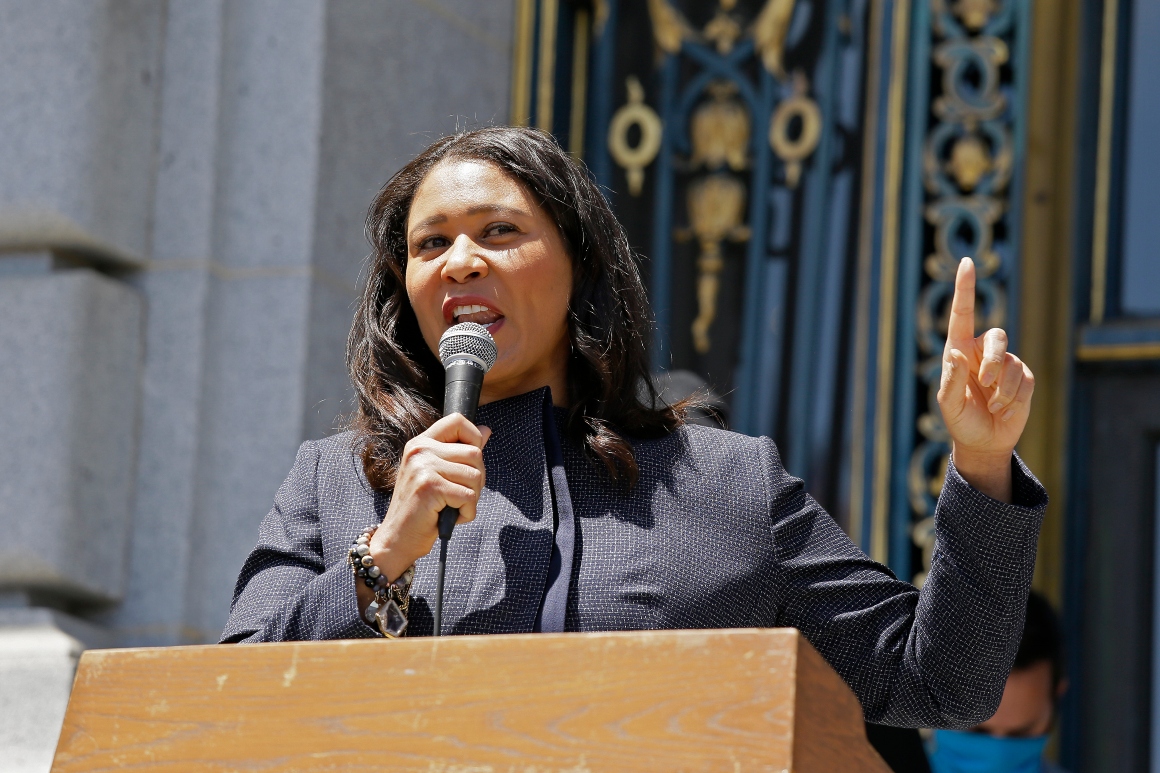 On Tuesday, Liccardo posted a heartfelt public mea culpa on Twitter for attending a small family gathering on Thanksgiving, after urging the public to forgo such events. It came after he felt an obligation to disclose to a television station that asked what he did for the holiday.

“They want to know their leaders can relate to their struggles," she said. "And when they get the idea that there are two sets of rules — one for politicians, and one for everyone else — it makes them crazy. And it’s particularly bad now.’’

Jerry Roberts, the former managing editor of the San Francisco Chronicle, said that the times are long past when leading politicians could be caught with their pants down — literally — in public places and never have to worry about immediate backlash and headlines.

“Social media has made all the difference,’’ he said. “Back then, people saw what they were doing, but they didn’t have the evidence.” Today, the evidence is as easy as hitting a “send” button — and reaching millions — a power that is both liberating and frightening in some respects, he said.

Democrats engaging in hypocritical behavior has been an easy target for Republicans. But they’ve also drawn tsk-tsking from their own partisans, who have gone out on a limb to defend their rules.

"It’s the whole cancel culture — you can’t make any mistakes, no matter how minor," he said.

Every time a rule-breaking act has been exposed, politicians have felt compelled to issue extensive apologies. It’s not only an attempt to seek forgiveness but to emphasize to the public that their rules are still necessary to control coronavirus.

San Jose’s Liccardo felt compelled to issue a five-paragraph mea culpa for attending a small outdoor gathering on Thanksgiving with his immediate family and elderly parents, who are in their 80s. The mayor’s statement detailed the outdoor dining and the family members involved, sparking anger from hundreds on social media who called Liccardo a hypocrite — and praise from constituents who said his honesty was refreshing.

Jim Reed, the mayor’s chief of staff, said Liccardo felt the need to be entirely forthcoming with his constituents.

“The mayor has talked about his shortcoming,’’ he said. But “the larger issue is … people need to exercise good judgment" while trying to observe rules to protect their health — masks and distancing and minimizing gatherings."

“People are going to want to live, to visit their parents, to do that safely — and still comply with regulations," he said.

Joe Mathews, a veteran California journalist and political observer, said the fallout for the mayor’s offense was overwrought and perfectly illustrated just how much the pandemic has skewed politics and public opinion.

He said people are getting outraged over trifling matters while ignoring bigger transgressions.

"It’s easy to obsess and feel angry, but the real issue is not the private stuff — but the public stuff they’re not doing," Mathews said.

“I don’t care so much that Gavin Newsom has gone to the French Laundry," he said. "but I do care that he has not managed to open my children’s school or get widespread testing or get people’s unemployment checks to them."