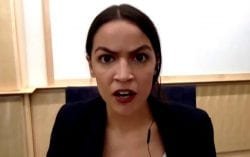 President Biden’s multi-trillion dollar, taxpayer-funded spending spree is getting sliced up by members of his own party.

Democrats had hoped to make the tax credit permanent, but, according to the NBC News report, they are being told to settle for a single-year extension.

The concessions are Biden’s alone as hardline progressives have not signaled any willingness to accept the cutbacks.

Another big priority — a sweeping climate measure known as the Clean Energy Performance Program — is also likely to be curtailed in the spending bill. However, congressional sources said Tuesday that while the climate proposals will be scaled back, there will be a focus on clean renewable energy. Two sources familiar with the negotiations also said lawmakers are considering shortening paid leave in the bill, potentially from 12 weeks to four.

So far, the extreme left of the Democrat party has lost a permanent child tax credit, taxpayer-funded community college, 12-week paid family leave, and climate action. And that’s only what has seeped out of the confidential meetings. As no deal has been struck, there is likely much more cutting to happen and it’s hard to believe that extremists in the Democrat party will accept anything less than everything as 2022 is set to relieve them of their bicameral majorities.