DeSantis cashes in on rising star status with big-money blitz

When Florida Gov. Ron DeSantis addresses a group of well-heeled Republican Party donors on Thursday, he won’t be on home turf like Naples’ “Millionaires’ Row” or in Indian Creek Island’s “Billionaire Bunker” — he’ll be across the country in San Diego, one of the GOP’s few traditional power centers in California.

The appearance is part of an aggressive summertime out-of-state fundraising swing, with DeSantis capitalizing on his rising profile to stuff his reelection coffers and cultivate a national donor network that could power a prospective 2024 presidential bid.

The first-term Republican governor is set to hopscotch across Southern California for a half-dozen reelection fundraisers this week, including stops in Los Angeles, Irvine and Manhattan Beach. He will also head to Las Vegas, where former Nevada state Attorney General Adam Laxalt is slated to host a high-dollar event. In the weeks to come, DeSantis is expected to make a fundraising tour through the Northeast as well.

The blitz comes as DeSantis draws widespread interest from Republican Party donors eyeing the next generation of party leaders, who have praised him for his anti-coronavirus lockdown policies and his combativeness toward the media. With the prospect of a Donald Trump comeback bid still uncertain, many contributors scoping out the party’s bench are flooding DeSantis with five-, six-, and even seven-figure checks for his 2022 campaign in Florida.

DeSantis’ cross-country fundraising swing draws parallels to former President George W. Bush, who courted donors outside his home state in the run-up to his 1998 reelection race. Bush received financial support for his gubernatorial campaign and, crucially, developed the national finance network that became a foundation of his presidential bid two years later.

“DeSantis is very smart to use his reelection and his national ascendancy to travel the country, raising money and building a network that could serve him well in 2022 and beyond,” said Scott Jennings, a former top Bush political adviser. “Circumstances are coming together for him quite nicely, and his operation appears agile enough to understand it all and take advantage of it.”

DeSantis allies say he’s focused solely on the 2022 contest and, if anything, finds talk of a 2024 run an unwelcome distraction. DeSantis faces the hurdle of running for reelection in a perennial swing state he won by only a fraction of a percentage point in 2018, and senior Republicans view him as one of the party’s most vulnerable incumbent governors up for election next year. The race has drawn a pair of potentially formidable Democratic candidates: state Agricultural Commissioner Nikki Fried and Rep. Charlie Crist, who is seeking a comeback after serving as a Republican more than a decade ago. Crist later switched parties.

Bush, by contrast, had the luxury of running for reelection in a state he had already won comfortably. When he ran again in 1998, he received more than two-thirds of the vote.

But Republican givers are treating DeSantis as a national figure. Invitations to Thursday’s fundraiser, which is being co-hosted by former San Diego County GOP Chairman Tony Krvaric and real estate investor Cathy Herrick, dub DeSantis as “America’s Governor.” Attendees are being asked to pony up as much as $100,000.

“The interest is sky-high and we expect a very successful visit,” Krvaric said in a text message.

DeSantis’ recent out-of-state fundraising travels have taken him to Lexington, Ky., where former U.N. ambassador and GOP megadonor Kelly Craft hosted a reception and dinner that drew around $300,000 for the governor’s reelection effort.

Craft, one of the party’s most sought-after contributors and a likely future candidate for governor of Kentucky herself, noted that many of the attendees had second homes in Florida. She said there was a desire to hear DeSantis talk about how he’d handled the pandemic.

“I just felt he was a perfect fit to come into Kentucky, especially with the group that we had. A lot of the folks have places in Florida and the reception was amazing,” said Craft. “This is a guy who has a national name but at the same time is focused on Floridians.” 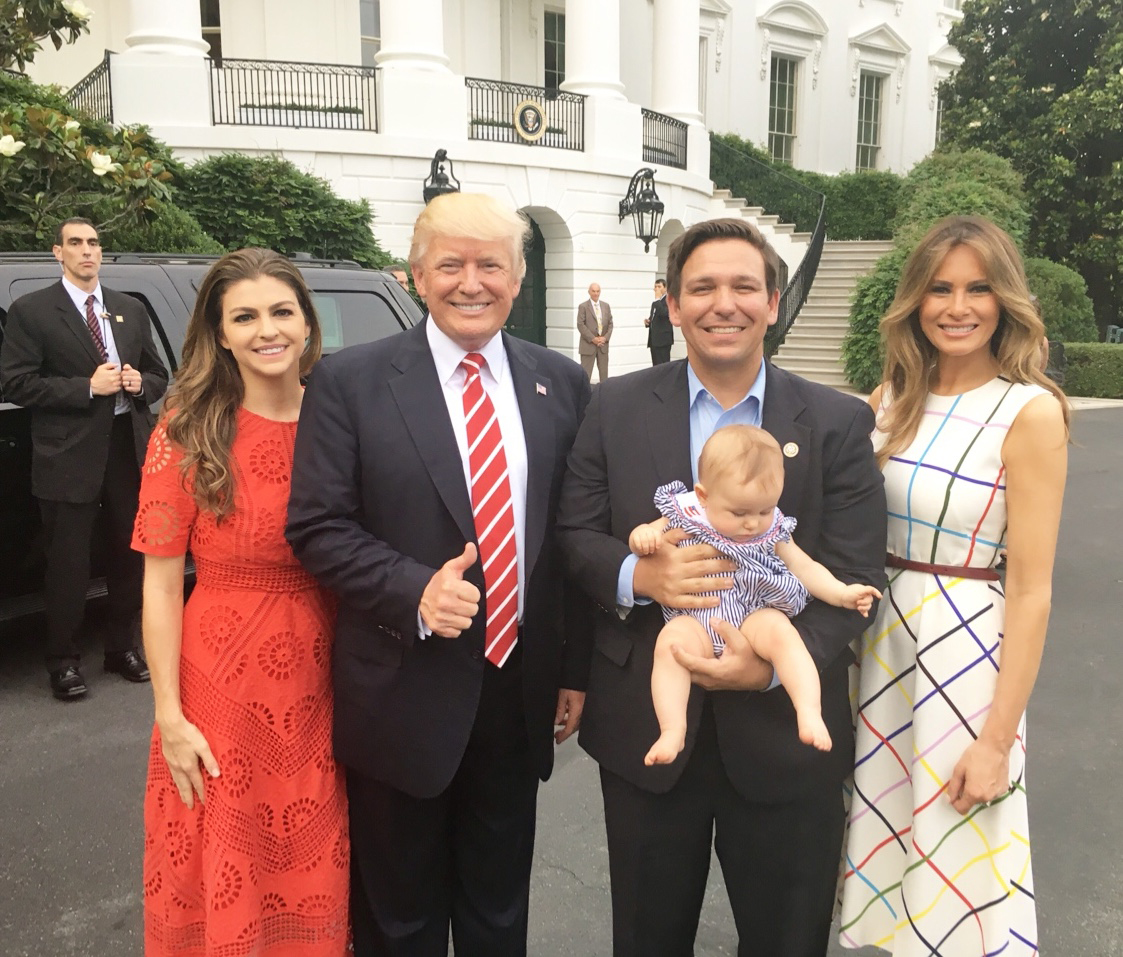 DeSantis also raised money in Pennsylvania last month, and he attended a series of donor events in Texas, including one hosted by venture capitalist Joe Lonsdale and another by Kent Hance, a former congressman and past chancellor of the Texas Tech University System.

“We put together a 40-person lunch with six days’ notice and raised $80,000. The interest and demand were absolutely off the charts,” said Matt Mackowiak, a Texas-based Republican strategist and fundraiser who co-hosted another event.

It’s unclear whether DeSantis’ national fundraising travels will extend into 2022, as the election draws closer and the demands of a swing-state campaign intensify.

After crisscrossing the country in the summer and fall of 1997, Bush’s out-of-state fundraising tapered off in 1998, when he focused on campaigning in Texas. By the time the dust had settled on the 1998 race, Bush had cultivated a national network of donors that included Florida real estate developer Mel Sembler, Arizona auto dealer Jim Click, and Massachusetts technology executive Richard Egan. Some of the national donors who bankrolled Bush’s 1998 effort would ultimately become members of the "Pioneer" program that bundled large sums for Bush’s successful 2000 presidential campaign.

DeSantis isn’t the only governor cultivating a national donor base. South Dakota Gov. Kristi Noem, who is also up for reelection next year, has been traveling beyond the confines of her small state. Noem, who has raised money in such states as Tennessee, Texas and Florida, has received financial support from the likes of California-based donors Richard and Stacy Kofoed, both of whom were major Trump backers. The governor is being shepherded around the country by former Trump campaign manager Corey Lewandowski.

Should they run in 2024, however, DeSantis and Noem may confront other Republicans who have more established donor bases. Texas Sen. Ted Cruz, who developed a wide network of contributors during his 2016 presidential bid, earlier this year held a donor retreat where the prospect of a national campaign was a subject of discussion, according to a person familiar with the event. Cruz also has a large base of small dollar givers; during the first three months of the year he raised over $5 million, more than any other Republican senator.

But being forced to run for reelection next year may turn out to be a blessing for DeSantis, giving him entrée to benefactors who see good reason to cut checks. Other would-be presidential contenders who aren’t running in the midterm elections, such as former Vice President Mike Pence and ex-U.N. ambassador Nikki Haley, are seeking out other ways to remain relevant, such as throwing themselves into congressional races.

“Some of the other candidates don’t have 2022 reelections,” said Jennings, “so they are in the phantom zone to some degree until Trump decides what he’s going to do.”