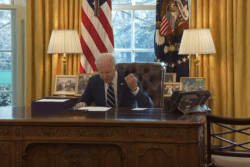 President Joe Biden signed a business regulation executive order Friday reminiscent of the Obama-era government overreaches that were reversed during the Trump administration.

By the authority vested in me as President by the Constitution and the laws of the United States of America, and in order to promote the interests of American workers, businesses, and consumers, it is hereby ordered as follows:

Sec. 2.  The Statutory Basis of a Whole-of-Government Competition Policy.
(a)  The antitrust laws, including the Sherman Act, the Clayton Act, and the Federal Trade Commission Act (Public Law 63-203, 38 Stat. 717, 15 U.S.C. 41 et seq.), are a first line of defense against the monopolization of the American economy.
(b)  The antitrust laws reflect an underlying policy favoring competition that transcends those particular enactments.  As the Supreme Court has stated, for instance, the Sherman Act “rests on the premise that the unrestrained interaction of competitive forces will yield the best allocation of our economic resources, the lowest prices, the highest quality and the greatest material progress, while at the same time providing an environment conducive to the preservation of our democratic political and social institutions.”  Northern Pac. Ry. Co. v. United States, 356 U.S. 1, 4 (1958).
(c)  Consistent with these broader policies, and in addition to the traditional antitrust laws, the Congress has also enacted industry-specific fair competition and anti-monopolization laws that often provide additional protections.  Such enactments include the Packers and Stockyards Act, the Federal Alcohol Administration Act (Public Law 74-401, 49 Stat. 977, 27 U.S.C. 201 et seq.), the Bank Merger Act, the Drug Price Competition and Patent Term Restoration Act of 1984 (Public Law 98-417, 98 Stat. 1585), the Shipping Act of 1984 (Public Law 98-237, 98 Stat. 67, 46 U.S.C. 40101 et seq.) (Shipping Act), the ICC Termination Act of 1995 (Public Law 104-88, 109 Stat. 803), the Telecommunications Act of 1996, the Fairness to Contact Lens Consumers Act (Public Law 108-164, 117 Stat. 2024, 15 U.S.C. 7601 et seq.), and the Dodd-Frank Wall Street Reform and Consumer Protection Act (Public Law 111-203, 124 Stat. 1376) (Dodd-Frank Act).
(d)  These statutes independently charge a number of executive departments and agencies (agencies) to protect conditions of fair competition in one or more ways, including by:
(i)    policing unfair, deceptive, and abusive business practices;
(ii)   resisting consolidation and promoting competition within industries through the independent oversight of mergers, acquisitions, and joint ventures;
(iii)  promulgating rules that promote competition, including the market entry of new competitors; and
(iv)   promoting market transparency through compelled disclosure of information.
(e)  The agencies that administer such or similar authorities include the Department of the Treasury, the Department of Agriculture, the Department of Health and Human Services, the Department of Transportation, the Federal Reserve System, the Federal Trade Commission (FTC), the Securities and Exchange Commission, the Federal Deposit Insurance Corporation, the Federal Communications Commission, the Federal Maritime Commission, the Commodity Futures Trading Commission, the Federal Energy Regulatory Commission, the Consumer Financial Protection Bureau, and the Surface Transportation Board.
(f)  Agencies can influence the conditions of competition through their exercise of regulatory authority or through the procurement process.  See 41 U.S.C. 1705.
(g)  This order recognizes that a whole-of-government approach is necessary to address overconcentration, monopolization, and unfair competition in the American economy.  Such an approach is supported by existing statutory mandates.  Agencies can and should further the polices set forth in section 1 of this order by, among other things, adopting pro‑competitive regulations and approaches to procurement and spending, and by rescinding regulations that create unnecessary barriers to entry that stifle competition.

Sec. 3.  Agency Cooperation in Oversight, Investigation, and Remedies.
(a)  The Congress frequently has created overlapping agency jurisdiction in the policing of anticompetitive conduct and the oversight of mergers.  It is the policy of my Administration that, when agencies have overlapping jurisdiction, they should endeavor to cooperate fully in the exercise of their oversight authority, to benefit from the respective expertise of the agencies and to improve Government efficiency.
(b)  Where there is overlapping jurisdiction over particular cases, conduct, transactions, or industries, agencies are encouraged to coordinate their efforts, as appropriate and consistent with applicable law, with respect to:
(i)    the investigation of conduct potentially harmful to competition;
(ii)   the oversight of proposed mergers, acquisitions, and joint ventures; and
(iii)  the design, execution, and oversight of remedies.
(c)  The means of cooperation in cases of overlapping jurisdiction should include, as appropriate and consistent with applicable law:
(i)    sharing relevant information and industry data;
(ii)   in the case of major transactions, soliciting and giving significant consideration to the views of the Attorney General or the Chair of the FTC, as applicable; and
(iii)  cooperating with any concurrent Department of Justice or FTC oversight activities under the Sherman Act or Clayton Act.
(d)  Nothing in subsections (a) through (c) of this section shall be construed to suggest that the statutory standard applied by an agency, or its independent assessment under that standard, should be displaced or substituted by the judgment of the Attorney General or the Chair of the FTC.  When their views are solicited, the Attorney General and the Chair of the FTC are encouraged to provide a response to the agency in time for the agency to consider it in advance of any statutory deadline for agency action.

Sec. 4.  The White House Competition Council.
(a)  There is established a White House Competition Council (Council) within the Executive Office of the President.
(b)  The Council shall coordinate, promote, and advance Federal Government efforts to address overconcentration, monopolization, and unfair competition in or directly affecting the American economy, including efforts to:
(i)    implement the administrative actions identified in this order;
(ii)   develop procedures and best practices for agency cooperation and coordination on matters of overlapping jurisdiction, as described in section 3 of this order;
(iii)  identify and advance any additional administrative actions necessary to further the policies set forth in section 1 of this order; and
(iv)   identify any potential legislative changes necessary to further the policies set forth in section 1 of this order.
(c)  The Council shall work across agencies to provide a coordinated response to overconcentration, monopolization, and unfair competition in or directly affecting the American economy.  The Council shall also work with each agency to ensure that agency operations are conducted in a manner that promotes fair competition, as appropriate and consistent with applicable law.
(d)  The Council shall not discuss any current or anticipated enforcement actions.
(e)  The Council shall be led by the Assistant to the President for Economic Policy and Director of the National Economic Council, who shall serve as Chair of the Council.
(f)  In addition to the Chair, the Council shall consist of the following members:
(i)     the Secretary of the Treasury;
(ii)    the Secretary of Defense;
(iii)   the Attorney General;
(iv)    the Secretary of Agriculture;
(v)     the Secretary of Commerce;
(vi)    the Secretary of Labor;
(vii)   the Secretary of Health and Human Services;
(viii)  the Secretary of Transportation;
(ix)    the Administrator of the Office of Information and Regulatory Affairs; and
(x)     the heads of such other agencies and offices as the Chair may from time to time invite to participate.
(g)  The Chair shall invite the participation of the Chair of the FTC, the Chair of the Federal Communications Commission, the Chair of the Federal Maritime Commission, the Director of the Consumer Financial Protection Bureau, and the Chair of the Surface Transportation Board, to the extent consistent with their respective statutory authorities and obligations.
(h)  Members of the Council shall designate, not later than 30 days after the date of this order, a senior official within their respective agency or office who shall coordinate with the Council and who shall be responsible for overseeing the agency’s or office’s efforts to address overconcentration, monopolization, and unfair competition.  The Chair may coordinate subgroups consisting exclusively of Council members or their designees, as appropriate.
(i)  The Council shall meet on a semi-annual basis unless the Chair determines that a meeting is unnecessary.
(j)  Each agency shall bear its own expenses for participating in the Council.

Sec. 6.  General Provisions.
(a)  This order shall be implemented consistent with applicable law and subject to the availability of appropriations.
(b)  Where not already specified, independent agencies are encouraged to comply with the requirements of this order.
(c)  Nothing in this order shall be construed to impair or otherwise affect:
(i)   the authority granted by law to an executive department or agency, or the head thereof; or
(ii)  the functions of the Director of the Office of Management and Budget relating to budgetary, administrative, or legislative proposals.
(d)  This order is not intended to, and does not, create any right or benefit, substantive or procedural, enforceable at law or in equity by any party against the United States, its departments, agencies, or entities, its officers, employees, or agents, or any other person.

Executive Order on Promoting Competition in the American Economy [Full Text] is original content from Conservative Daily News – Where Americans go for news, current events and commentary they can trust – Conservative News Website for U.S. News, Political Cartoons and more.

Boston Pride announces it will shut down after criticism it was racist, insufficiently supportive of BLM