Inside the Democratic strategy to expand voting rights state by state

Who can vote in the next election — and how easily — will depend on where Americans live more than at any point in recent decades.

Red and blue states are on opposite tracks in shaping the electoral process: As Republicans pass some of the most restrictive voting laws of modern times, Democrats are ramping up a strategy to expand voting rights by passing bill after bill to make it easier for more Americans to access the ballot box.

Democrat-led states like New York, New Jersey and Virginia have been busy chipping away at electoral guardrails, approving automatic voter registration and other measures designed to increase turnout, as GOP-helmed Georgia, Florida and Texas are trying to make voting harder under the guise of voter integrity.

“New York had one of the worst voter participation rates in the country and we needed to remedy that,” said New York Senate Deputy Majority Leader Michael Gianaris, a Democrat whose automatic registration bill was signed into law in December. “There’s a broader principle at stake when so many states are moving in the opposite direction and making it more difficult to vote for blatantly political reasons.”

The fracture between red states limiting voting access and blue states expanding it may deepen the partisan divide in an already divided nation. The actions are also likely to end up in the courts, leading to potentially years of debate over what is and what is not constitutional.

Recent years have been pivotal for Democrats’ hold on statehouses as they gained back seats lost long ago, shifting power in enough places that the party was free to pursue voting rights expansions and progressive causes like criminal justice and police reforms. While Republicans still control 61 legislative chambers and 30 legislatures, a majority, Democrats gained ground in 2018 by taking over six state legislative chambers after getting walloped in the midterm elections in former President Barack Obama’s second term. The 2020 election maintained the status quo. 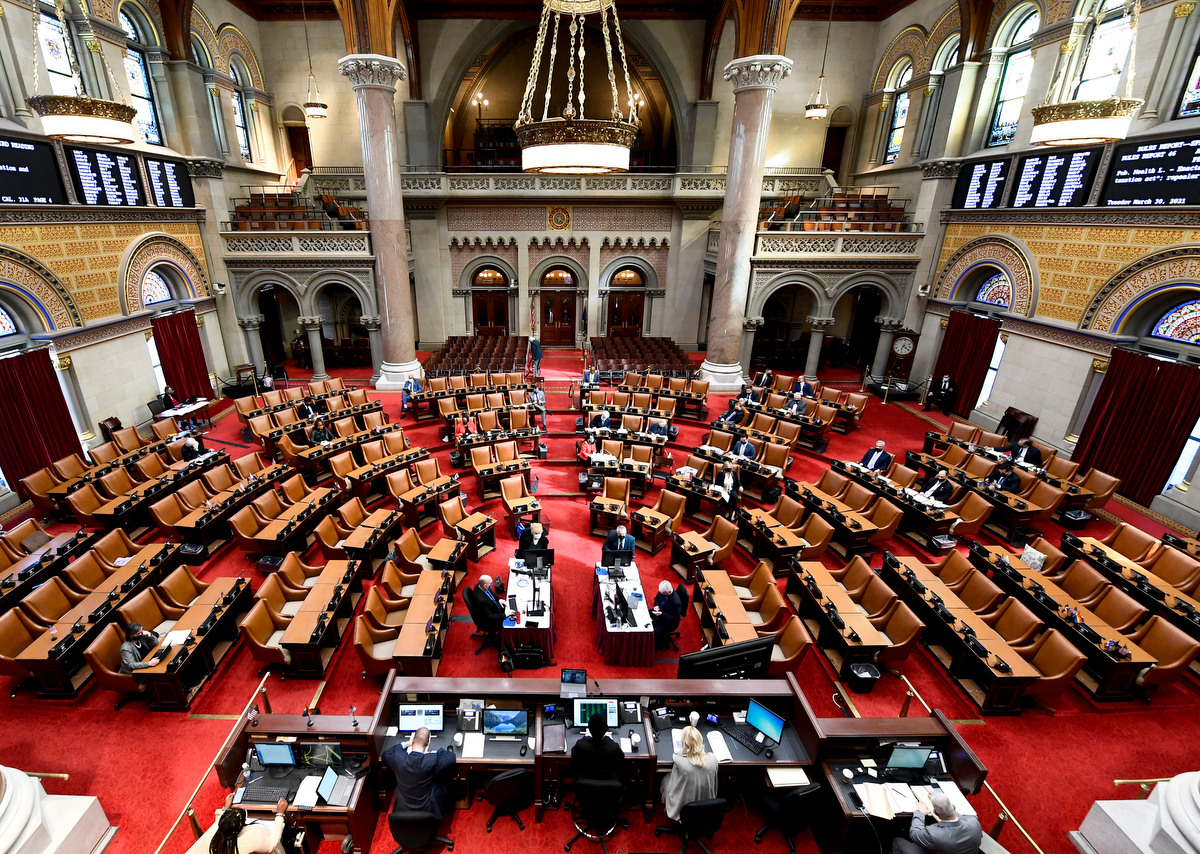 When Democrats gained control of the New York Senate in 2018 after decades of Republican leadership, they immediately went to work undoing the state’s restrictive voting laws.

They kept it up for the next few years. Within weeks of gaveling into each session, Democrats leveraged their majorities in both chambers to pass laws that expanded early and absentee voting and registered voters when they went to the DMV to get a driver’s license. This year, they’re also aiming to codify an executive order from Gov. Andrew Cuomo that restores voting rights to people with prior convictions.

“We wanted to set the example of why it’s important to make it easier to vote,” Gianaris said.

By the end of March, nine bills with expansive voting provisions had been signed into law in the U.S. during state legislative sessions, and at least 112 bills were still moving in 31 states, according to an analysis from the Brennan Center for Justice, which is tracking the issue.

After New York lawmakers initially worked to eliminate barriers to voting, their focus now is on expanding the pool of eligible voters, Gianaris said. That involves restoring voting rights to people convicted of felonies.

Legislation achieving that goal is also moving in 10 other states, including Alabama, Connecticut, Minnesota, Iowa, Nebraska, Oregon and Tennessee. Just last week, Washington Gov. Jay Inslee, a Democrat, signed a law that enfranchised people convicted of a felony once they are released from prison, even if they’re under community supervision. 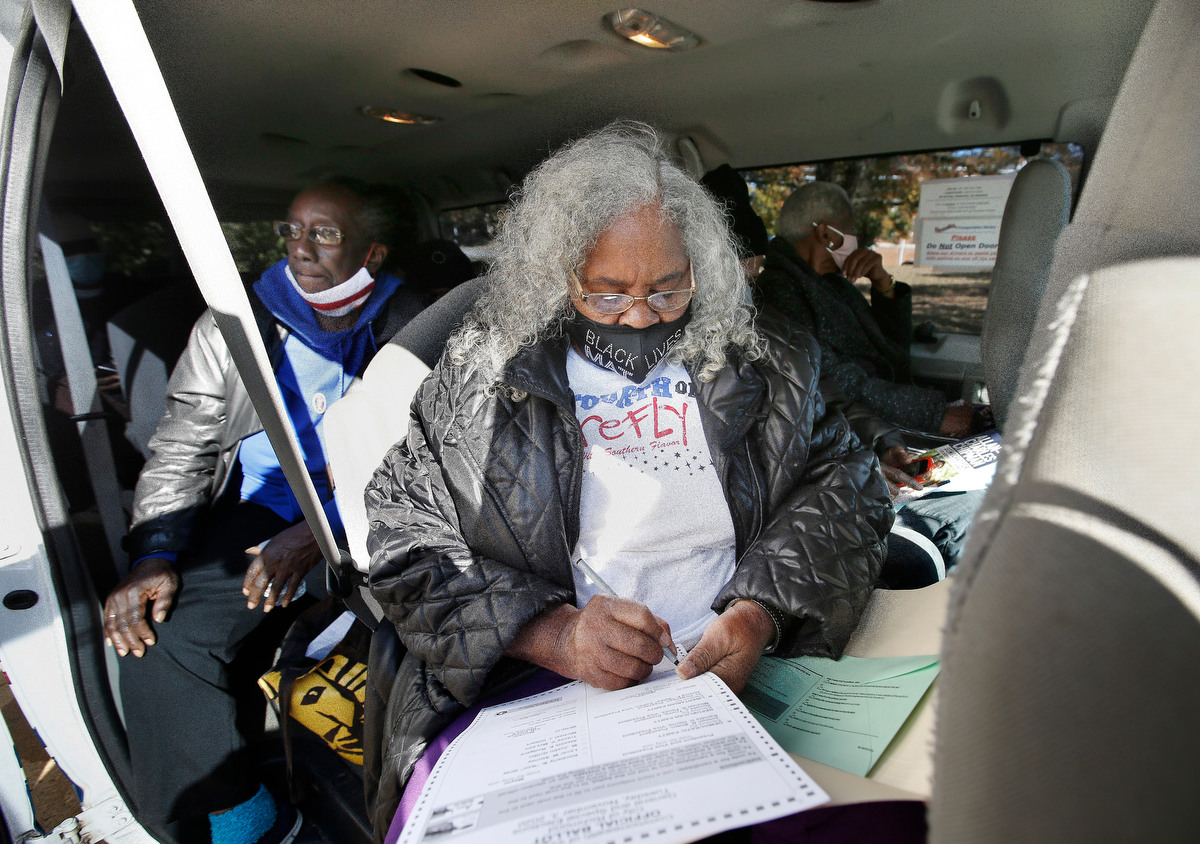 To be sure, not all Republican legislatures are opposed to expanding voting access. In Kentucky, Democratic Gov. Andy Beshear signed a sweeping electoral reform law passed by the Republican-controlled legislature that broadens early and absentee voting and establishes recount procedures.

More broadly, Republicans push back against criticism from Democrats that they’re engaged in a scheme to shrink the pool of eligible voters to keep their hold on power. The actual goal, they argue, is to put safeguards in place to prevent voting fraud and maintain public trust in election results.

The idea that only blue states are expanding access is “a false dichotomy that has a lot to do with political narratives instead of reality,” said Jason Snead, a former senior policy analyst at the Heritage Foundation and executive director of a new conservative group the Honest Elections Project.

“My concern is if a state is going to buy into this false dichotomy and only going to look at election rules as barriers, they’re not going to see that the public needs to be assured that they can trust the results,” he said, adding that the legislative push could backfire if voters are wary. “If you don’t think the process works or is rigged, you’re not going to vote.”

Democrats would beg to differ. In New Jersey, Democratic Gov. Phil Murphy was elected in 2017 after promising to sign every single voting rights expansion that Republican Chris Christie had rejected over his two terms leading the state. Murphy and lawmakers moved quickly, with the governor enacting automatic voter registration legislation in 2018. The following year, he signed a law restoring voting rights to people on probation or parole.

This year, the Democratically-controlled statehouse passed two bills that expand voter access on the same day that Georgia Gov. Brian Kemp, a Republican, signed some of the country’s most restrictive voting legislation. Murphy later signed the measures that authorize early in-person voting and mandate a broader disbursement of ballot drop boxes. 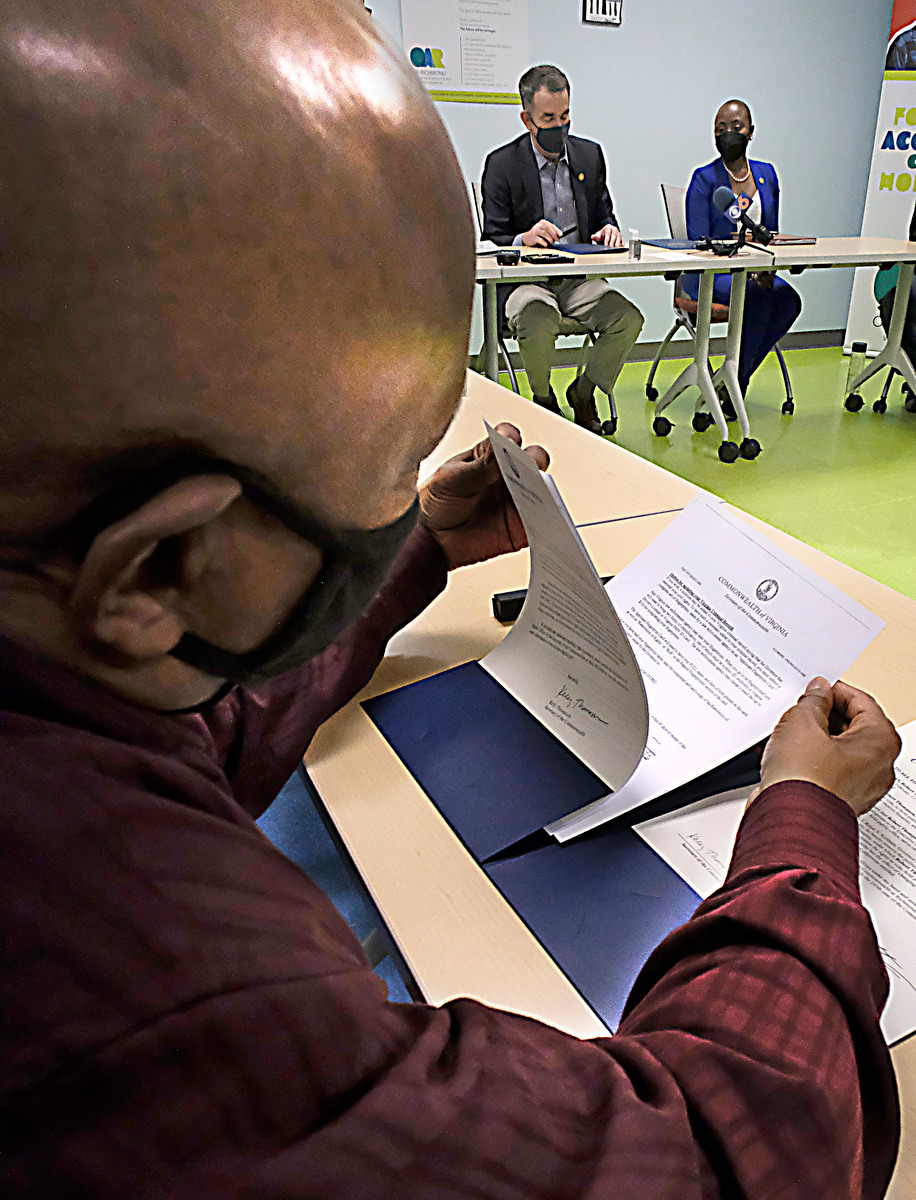 Having nine days of early, in-person voting ahead of November elections is crucial for marginalized communities and will allow Black residents in New Jersey to participate in “Souls to the Polls” drives on Sundays, said Henal Patel, director of the Democracy and Justice program at the nonpartisan New Jersey Institute for Social Justice.

“Election Day voting is a challenge for a lot of people,” Patel said. “People want to vote on Election Day, but it’s difficult to be able to take time out on a Tuesday for a number of people. Having flexibility to vote on other days is really crucial for voter access.”

Last month, Virginia became the first state to enact its own version of a voting rights act when Democratic Gov. Ralph Northam signed a sweeping law that requires all local elections administrators to receive public feedback or approval from the state’s attorney general before making changes like moving voting precincts or elections registrars’ offices. The legislation also allows voters to sue over voter suppression and prohibits any racial discrimination or intimidation related to voting.

That law builds on more than a year of related actions from state leaders, such as repealing a voter ID requirement, enactment of 45 days of absentee voting and implementing automatic voter registration for anyone who receives a drivers license.

Virginia Del. Marcia Price, who has spearheaded voting rights legislation, said her attention is now turning to advocating for , the national voting rights proposal under consideration by Congress. Price, a Black woman whose family was involved in the civil rights movement in the South, said that it’s “very hard for me to stop at celebrating for Virginia knowing that, for family members in other states, their rights won’t be as protected as Virginians.”

She’s also finding ways to support other local Democrats and organizers in states like Georgia, where Republicans’ overhaul of the state’s voting system that critics say hearkens back to the Jim Crow era.

Their accomplishments in Virginia, to a degree, are “being overshadowed by how terrible things are going in other states,” Price said. She said she’s been in touch with lawmakers and grassroots organizations across the country as they compare notes on how to approach the issue.

“I cannot imagine acting like we are legislating in a vacuum when what we do in one state can impact another state,” Price said.

Those meetings, Elias said, are intended to ensure that legislators are “armed with all of the tools for how to make voting more accessible to their citizens and how to fight back against the ‘big lie’ that Republicans are telling legislatures around the country,” he said in an interview, referring to Republicans’ argument that voting laws need to be tightened up to guard against fraud.

“It is important for Democrats to understand how important it is that they need to push for those things and to celebrate their successes,” Elias said.

George Floyd’s family: ‘Today, we are able to breathe again’