Yes, Dr. Oz is serious about running for the Senate.

The famous TV physician’s prospective campaign for an open Senate seat in Pennsylvania remains a hush-hush affair — no one so far has admitted to working on it and the consultants thought to be involved are remaining tight-lipped. But Mehmet Oz is searching for a scheduler and policy director, according to a person contacted about the jobs. He has also recently looked for a home in the Philadelphia suburbs, another source said.

It’s a sign of the unsettled nature of the current GOP primary field, which has party insiders alarmed by the absence of a strong candidate in one of the nation’s most important Senate races.

“People are still uneasy about everyone that’s there,” said Christopher Nicholas, a longtime Pennsylvania-based GOP consultant. “There’s no 600-pound gorilla” in the race, “let alone an 800-pound gorilla.”

The frontrunner so far, Sean Parnell, has been accused by his estranged wife of domestic violence in a high-profile child custody case. He has denied the allegations. Less well-known contenders have been knocked within the party as too boring, divisive or inexperienced.

“It’s ripe for somebody to parachute in and take it,” said Rob Gleason, former chair of Pennsylvania’s Republican Party. 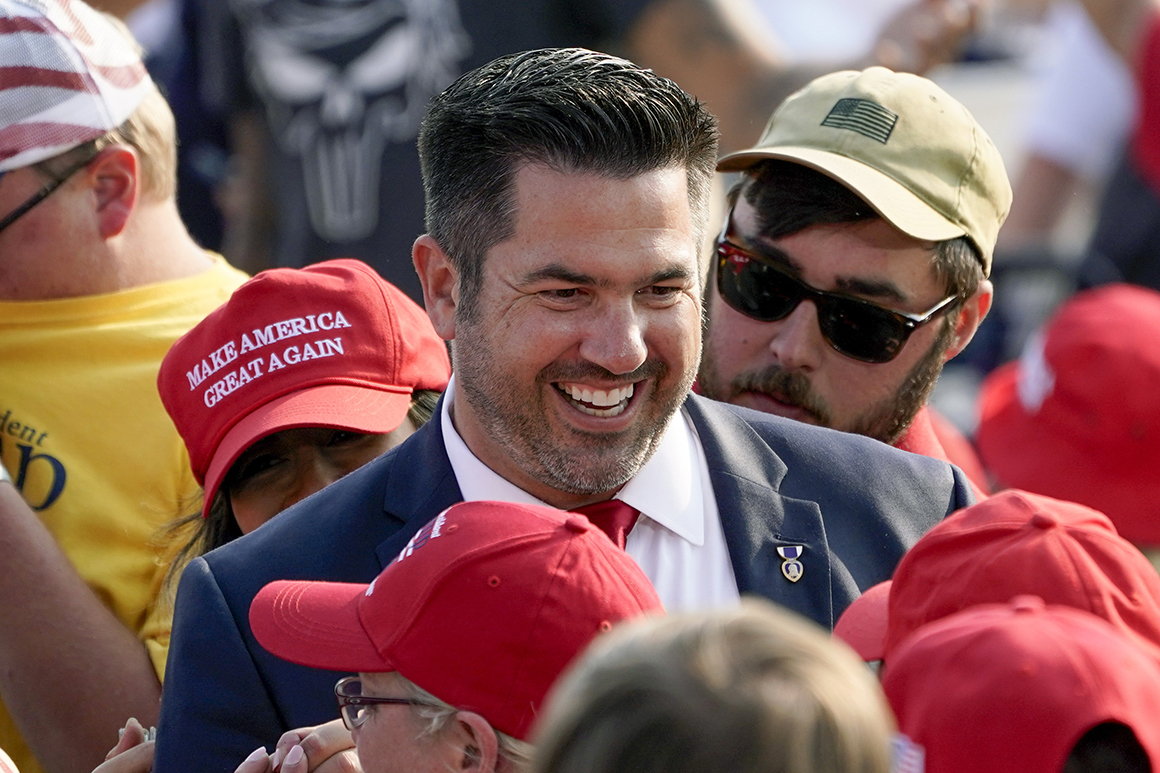 The contest is critical for Republicans: They must hold onto the seat being vacated by Sen. Pat Toomey to take back control of the chamber, and in theory, they should be able to. Inflation is high, President Joe Biden’s approval rating is sagging and the party flipped Democratic seats in this month’s elections, including in critical battleground suburbs. A net gain of just one Senate seat would put the GOP in charge.

But Republican activists, party officials and donors are concerned that Parnell, who has been endorsed by former President Donald Trump, can’t win a general election after being accused of striking his wife and child.

Jeff Bartos, a real estate developer who is also running, has attacked Parnell as “unelectable” — and Republicans fear that, too, makes him an imperfect candidate who has alienated supporters of Parnell and even Trump. At the same time, many said Carla Sands, a former ambassador under Trump, has not gained much traction.

That has led to a churn of would-be candidates, and would-be political consultants, leaving the field unsettled and the party unsure of what to do to fix the problem. Several Republicans told POLITICO they aren’t convinced that Dr. Oz is the savior they’re looking for, however.

"I don’t know a single politically involved person in Pennsylvania who’s not being paid who wants to be involved in this effort,” said a Pennsylvania Republican strategist, adding that the “pretty much universal response has been ‘LOL.’”

“There’s no one who thinks the solution to the Sean Parnell issue is Dr. Oz."

An aide for Oz did not respond to requests for comment. A spokesperson told the Washington Free Beacon, which first reported his interest in the race, that “Dr. Oz has received encouragement to run for the U.S. Senate, but is currently focused on our show and has no announcement at this time."

Parnell’s child custody dilemma “kind of opened the door to other candidates considering jumping in,” said a top Republican aide in Pennsylvania. “It’s also to some degree a political consultant-driven process, so it behooves some of these firms to go out and find a wealthy, highly visible, well-known candidate to run them.”

Supporters of the current candidates pushed back on the idea that the field is subpar. Jackie Kulback, chair of the Cambria County Republican Committee and a Bartos backer, said Bartos is the most electable candidate in the race and that other county leaders are worried that Parnell would lose in a general election.

“We’ve got to get someone who can win,” she said. “If the Republicans get this wrong, we’re going to live with this for generations. Because how Pennsylvania goes is how goes the country.”

A person close to the Parnell campaign said he would only get out of the race if he loses his children in the custody fight. Otherwise, the campaign expects he’ll survive.

“His entire campaign comes down to whether he keeps custody of his kids or not,” the source said.

Oz appears to be in the early stages of a campaign, and could always decide not to run if Parnell remains in the primary or another leading candidate emerges. Oz has yet to reach out to some top county party chairs.

“I’ve heard nothing from him, anyone working for him, or even anyone who saw the article and wanted to talk about him,” said Sam DeMarco, chair of the Republican Party in Allegheny County, the second biggest county in the state. He added in a text that “I’ve heard nothing from any of the PA Consulting Firms regarding his candidacy.”

Pat Poprik, chair of the populous Bucks County’s Republican Party, said, “We usually get contacted: We’re the fourth biggest county. … I’m sure if he’s going to at some point he will, but no, at this moment we haven’t spoken to him.”

News last week of Oz’s reported interest in the race was quickly followed by confusion and speculation among Republican strategists, prompting a game of telephone about who, exactly, is assisting with his campaign. The consultants involved are remaining quiet.

Reached by phone last week, Jamestown CEO Larry Weitzner said he did not have time to speak and did not respond to subsequent attempts to discuss Oz’s interest in the race.

Multiple sources also reported that Republican pollster Jon Lerner and strategist Chris Hansen, who was chief of staff for former Sen. Cory Gardner and executive director of the National Republican Senatorial Committee, are both working with Oz.

Lerner said Wednesday he had no comment about the Oz claims, before proceeding to quote a line from the movie “Harry Potter and Deathly Hallows: Part 1.”

“One hears many things,” Lerner said. “Whether among them is the truth is not clear.”

Hansen did not respond to repeated inquiries about his reported involvement.

A person with knowledge of the NRSC’s outreach was not aware of any conversations the group has had with Oz.

The 61-year-old television personality and cardiothoracic surgeon is already being tagged by critics as a carpetbagger. Oz was registered to vote in New Jersey, where he cast an absentee ballot in October 2020. He registered in Pennsylvania two months later, voting in the state by absentee ballot last month.

Having largely avoided making public comments on politics in the Trump era, Oz would also likely face questions in the Republican primary about his conservative bona fides.

Describing himself in 2007 as a “moderate Republican,” Oz at the time listed Arnold Schwarzenegger and Theodore Roosevelt as his role models in politics.

Oz has faced criticism for promoting obscure supplements and products on his show that have not been proven to be effective, including during a Senate consumer protection subcommittee hearing in 2014. Then-Sen. Claire McCaskill at the time lambasted Oz for touting “miracle” pills and “magic weight-loss cures.”

A year later, a group of physicians at Columbia University Medical Center, where Oz remains on staff, sent a letter urging the medical school to drop their affiliation with him, writing that Oz “manifested an egregious lack of integrity by promoting quack treatments and cures in the interest of personal financial gain.”

Born in Ohio to Turkish parents, Oz served in the Turkish Army as a dual citizen.

Operatives have already begun circulating opposition research on Oz, including a March 2020 interview on NBC News in which he suggested the United States should follow China’s lead by implementing temporary lockdowns to curb the spread of the coronavirus, an approach some Republican governors initially embraced, but which was largely opposed by conservatives.

“We just have to copy what they did, take their blueprint and repeat it here in this country,” Oz said of China at the time.

Oz is not the only potential candidate eyeing a run. Keith Rothfus, a former congressman from western Pennsylvania, is also rumored to be considering getting in if Parnell ends his campaign. Asked for comment, Rothfus said, “Simply put, Sean Parnell has no plans to drop out of the race for Senate.”

Rothfus did not respond to a follow-up question about whether he’d rule out a bid if Parnell leaves the scene.

David McCormick, CEO of Bridgewater Associates, is another possible candidate who has recently sparked the curiosity of top Republicans in Pennsylvania and Washington, D.C.

Earlier this year, Kenneth Braithwaite, who served as Navy Secretary under Trump, and John Giordano, who was previously an attorney for Trump’s campaign, briefly gave hope to Republican power players in the state when their names emerged as potential contenders. But as of now, their campaigns haven’t materialized.