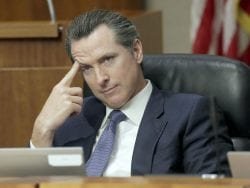 Over 1.2 million California residents have signed a petition to recall incumbent California Democratic Governor Gavin Newsom as of Monday.

The recall effort follows growing outrage over Governor Newsom’s COVID-19 policies, specifically his decision to suspend all outdoor dining and enforce mandatory stay at home orders according to The Hill.

Newsom came under fire in December for his decision to dine indoors at English Laundry, a pricey upscale French cuisine restaurant located in San Francisco while ordering the suspension of indoor dining.

These orders have prompted 30% of all California small businesses, including bars and restaurants, to remain closed according to the Little Hoover Commission.

“Californians are hurting, and we’ve had a dramatic failure of leadership from the governor…The governor’s actions are harming lives and livelihoods, people are at their wits’ end and they want to do something about it,” said former San Diego Mayor and Republican Gubernatorial candidate Kevin Faulconer in a statement to The Hill.

Supporters of the recall have raised roughly $1.7 million to fund their efforts, according to a report from the Wall Street Journal. Dan Newman, an advisor to Gavin Newsom blamed the recall campaign on supporters of former President Donald Trump.

Those supporting the recall effort have until March 17th to gather the remaining 300,000 signatures needed to trigger a recall election.