Some Trump aides stuck with him till the end. Now they’re screwed.

Four days into his post-presidency life, Donald Trump has insulated himself from the outside world.

Unseen by the public and unusually quiet as key parts of his policy legacy are dismantled by the new administration, the once ubiquitous Trump has been plotting out his political future. But without a social media loudspeaker through which to tease his plans, few know what to expect next, including his own former aides.

“We’ll do something, but not just yet,” Trump told a reporter at his Mar-a-Lago compound on Friday.

So far, the former president has floated the creation of a third-party movement that would enable him to support MAGA-friendly candidates in the 2022 midterms and beyond. He is also interested in becoming “the nation’s leader on ballot and voting integrity,” his senior adviser Jason Miller said on a podcast last Thursday.

But as Trump gingerly charts out next steps, he is doing so increasingly alone. Two of his most trusted confidantes, Johnny McEntee and Hope Hicks, declined to join him in Florida after spending years by his side on the campaign trail and in the West Wing.

“He did pretty well when he was in the private sector, so I think he’s just going to do his thing,” a former Trump official said of McEntee. 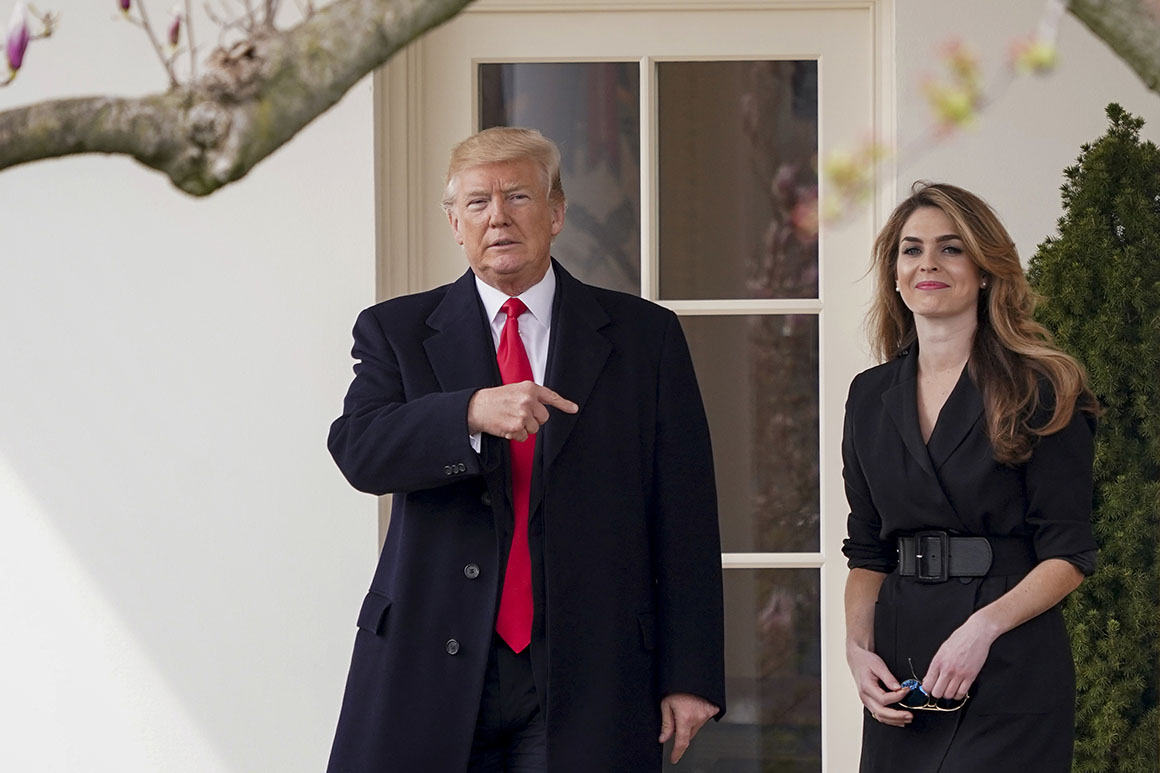 Many other aides have left his side, eager to start anew far away from their former boss. White House aides and administration officials who once relished their West Wing perches have jetted off on remote getaways — cashing in on a mountain of unused vacation time. Others are frantically asking former colleagues for help finding work as they prioritize their own careers over whatever chapter Trump is planning for himself.

It’s not been easy. Tainted by Trump’s reputation, several Trump aides described an increasingly bleak job market with virtually no chance of landing jobs in corporate America and some even having seen promising leads disappear after the rampage at the U.S. Capitol. A second former White House official said they knew of “people who got jobs rescinded because of Jan. 6.” A Republican strategist was blunter.

“They are really f—ed,” the strategist said, pointing to some top officials who stuck with Trump until the bitter end. “The Hill scramble, one of the few places where they’d be welcomed, already happened a month or so ago… They were told over and over to take their hand off the hot stove, and they didn’t want to listen.”

It’s not just the lower- and mid-level staffers getting pinched. Two people familiar with his thinking said Trump’s former chief of staff Mark Meadows, who spent seven years in the House of Representatives before joining the White House, was even considering a position at the Trump Organization because of a lack of options.

Faced with these employment hurdles, staffers have circulated an informal directory of plausible job openings among each other. Other Trump officials decided to start their own businesses or transitioned back to Republican offices on Capitol Hill or hired their former colleagues. Former White House director of strategic communications Alyssa Farah, for example, recently tapped a former aide to Vice President Mike Pence to join her new consulting operation, according to a person familiar with the move.

It’s a far different reality from where Trump and his aides had envisioned they would be. A month ago, everything seemed crystal clear: He had lost the 2020 election but would soon launch a juggernaut campaign for the presidency in 2024, and his allies and inner circle would be there to help. Now, the former president’s team is scampering away — willing to leave Washington, in some cases for red states like Texas and Florida, to increase their job prospects — while his own second act is clouded by uncertainty.

One former senior administration official noted that many inside the White House were waiting until after the Electoral College votes were counted to begin their job search in earnest, so as not to step on messaging about Trump’s efforts to challenge the election results. But then, the riots on Capitol Hill upended their plans.

“They looked to that [Jan. 6] as the end of the limbo state people were operating in so they could start moving on to the next thing” the former official said. “But the 6th put a shock to that.”

Since leaving Washington on the morning of President Joe Biden’s inauguration, Trump has kept out of the public eye. He golfed twice at his namesake club in West Palm Beach and has mingled with family and friends at Mar-a-Lago.

Down in Florida, he has been surrounded by a small group of aides, including Miller, and staff who are being employed by the General Services Administration as support for former presidents.

“For him to go from a staff of hundreds to a small group — it’s going to be a big shift for him,” the former senior official said.

While his political staff has largely vanished, Trump has quietly been assembling a defense team for his upcoming Senate impeachment trial, which is due to begin Feb. 8. The trial, launched after the House impeached Trump for helping incite the insurrection at the Capitol, could result in him being barred from running for future office. Trump has already tapped South Carolina-based attorney Butch Bowers to join his impeachment defense and hopes to further expand the team in the next week, according to a person familiar with the planning. He also faces the looming threat of potential civil or criminal charges related to the Trump Organization’s business and tax practices.

As Trump gets set for those battles, some White House officials are trying to move away from the drama entirely, keen on decompressing after enduring the daily scandals, ruthless knife-fights and unprecedented chaos that defined the Trump administration.

Chad Mizelle, the former acting general counsel of the Department of Homeland Security, moved down to Florida, where his wife is a judge. Asked if he was searching for a job yet, he said in a text message: “I’m sipping margaritas 😊”