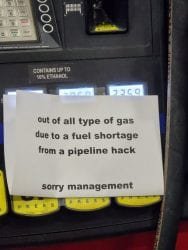 Drivers in the Southeast began running into long lines and empty pumps Monday night despite assurances from the Biden administration that there were no shortages.

Later Monday evening, the White House walked back its “not a supply shortage” statement.

The Administration is continually assessing the impact of this ongoing incident on fuel supply for the East Coast. We are monitoring supply shortages in parts of the Southeast and are evaluating every action the Administration can take to mitigate the impact as much as possible.

The shortages and long lines are due to a ransomware Cyberattack on Colonial Pipeline. The company supplies almost half of all fuel to the mid-Atlantic and Southeastern United States.

Colonial said that they are restarting smaller “lateral” pipelines that move fuel from terminals to depots, but that it could be several more days before the four main transport lines are reopened.

The FBI said Monday that the hack was perpetrated by a Russia-based cybercriminal organization known as Darkside and that the group has been under investigation since October.

Poll: Over Half of Independent Voters Disapprove of Biden’s Gun Control