The inside scope: How ego led Trump to hide a colonoscopy

It was one of the great mysteries of his time in office. Why, exactly, did President Donald Trump make an unscheduled trip to Walter Reed National Medical Center one sunny Saturday afternoon in November 2019?

A wide range of conspiracy theories was birthed from that moment — It was a heart ailment! He had a stroke! An impeachment driven anxiety attack? — further fueled by the fact that a White House famous for leaks steadfastly refused to explain it. Indeed, aides themselves didn’t know. And those who did were incredibly tight-lipped about it. Until now.

In her tell-all book, former White House press secretary and chief of staff to the first lady Stephanie Grisham strongly implies that Trump went to Walter Reed for a routine colonoscopy as part of his annual physical. She never explicitly says so. But multiple former officials confirmed that that was, in fact, the reason.

Grisham’s book states that Trump made the decision to keep his visit under wraps because, she suspects, he didn’t want to be the “butt of the joke” on late night television. The book also states her belief that he avoided anesthesia for the painful and invasive procedure because he didn’t want Vice President Mike Pence to take over temporarily as commander-in-chief and loathed showing any kind of weakness.

Former White House aides say they’re surprised the detail never got out while Trump was president. After all, just about everything else eventually made its way into TV chyrons and newspaper headlines.

Instead, the moment became emblematic of another prominent feature of the Trump years: the president taking an otherwise normal event — in 2018, more than 19 million colonoscopies were performed in the U.S. alone — and turning it into something far larger and more controversial by his cryptic handling of it. In the process, it fed a destructive feedback loop: in which the White House operates in secrecy, the press gets motivated by it and the resulting speculation and reporting feeds a narrative of media irresponsibility.

Trump, a notorious germaphobe who is also obsessed with preserving an image of being in extremely top-notch health, went to immense lengths to hide word of his colonoscopy; so much so that few aides beyond Grisham, the president’s physician, and the chief of staff’s office were even made aware at the time of just why he went to the hospital.

The initial line offered to explain his two-hour visit was that he was simply going in for a routine check up. Grisham herself told reporters he was “taking advantage of a free weekend” — a half truth that would raise questions about her current account if not for the fact that others confirmed it.

Trump himself seemed particularly eager to get on the act of spinning his visit to the doc.

“I went for a physical on Saturday. My wife said, ‘Oh darling, that’s wonderful.’ Because I had some extra time,” he said during a Cabinet meeting shortly after the visit took place. “But I went for a physical and I came back and my wife said, ‘Oh darling are you OK? What’s wrong? They’re reporting you may have had a heart attack.’ I said why did I have a heart attack? Because you went to Walter Reed, that’s where we go when we get the physicals. I was only there for a very short period of time.”

Trump explained to "Fox & Friends" the following Friday that White House physician, Dr. Sean P. Conley, noticed a break in his schedule and asked if he would come out to Walter Reed for a portion of his physical.

But Trump’s incredulousness over the coverage of his Walter Reed visit did little to tamp down speculation about what actually had occurred. In fact, it had the opposite effect. The topic became a fascination for newsrooms. Inside the White House, aides also were searching around for answers.

The day of the trip itself had been relatively quiet, with the exception of a flurry of tweets from Trump on everything from Donald Trump Jr.’s book to the stock market. Impeachment hearings on Capitol Hill had just taken place but, as was typical on most weekends, there were few staff members around the sleepy West Wing. Then, in the early afternoon, a press wrangler called on the pool to gather for a secret movement.

A reporter on pool duty later informed the public around 3 p.m. that the president had arrived at the hospital, about 30 minutes north in Bethesda, where they waited for almost two hours. No events were listed in advance on the White House schedule for the weekend, and the use of a motorcade on a clear day — instead of a Marine One helicopter — only added to speculation about Trump’s health.

“Was he going to the CIA building?” One journalist in the pool that day remembered wondering. “We didn’t know where we were going, but of course we were trying to think of whether it could be some kind of urgent health issue. We speculated, I think some people wondered if it could be a heart-related issue but no one had any idea and everyone was trying to find out. We were all spitballing.”

The president was spotted by a photographer leaving Walter Reed at 5:03 p.m., “shirt open, no tie,” and with the exception of a press van’s flat tire, the evening ended unceremoniously. Shortly after 8 p.m., Trump was back on Twitter.

On Fox News that night, Grisham told host Jeannine Pirro that Trump was "as healthy as can be … He’s got more energy than anybody in the White House."

But many in the public were unconvinced. There were questions about why Trump wasn’t wearing a tie, or whether he looked like he was walking normally, or why he was carrying an envelope (likely his collection of work papers and news clips).

“The question is less what did they do Saturday afternoon. The more important question is why was it done?” Dr. Jonathan Reiner, the former cardiologist to Vice President Dick Cheney, asked on CNN. “It doesn’t make a lot of sense to do that kind of testing at Walter Reed without provocation.” 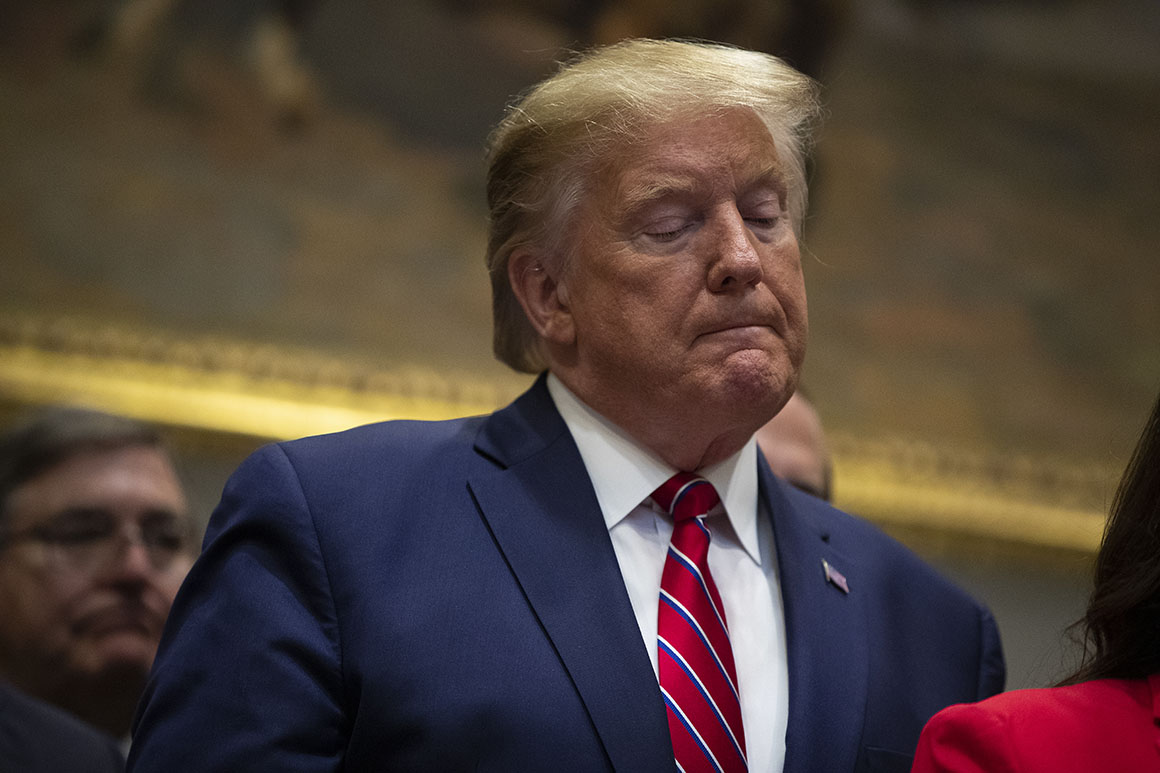 The first inclination of what actually happened came in a book by New York Times reporter Michael Schmidt about a year after the mystery procedure. Schmidt noted that “in the hours leading up to Trump’s trip to the hospital, word went out in the West Wing for the vice president to be on standby to take over the powers of the presidency temporarily if Trump had to undergo a procedure that would have required him to be anesthetized.”

Trump reacted as expected to Schmidt’s reporting, vociferously denying his visit had anything to do with him having “mini-strokes,” as suggested on Twitter. Soon after, he ordered Dr. Conley to publicly weigh in.

“I can confirm that President Trump has not experienced nor been evaluated for a cerebrovascular accident (stroke), transient ischemic attack (mini stroke), or any acute cardiovascular emergencies, as have been incorrectly reported in the media,” Conley wrote in an unusual statement circulated to the press.

And that was that. The Walter Reed trip remained an object of fascination and intrigue until Grisham came forward to finally provide some clarity.

Looking back now, one former Trump White House official said it was understandable the former president wouldn’t want to reveal he was having a colonoscopy.

“When you’re President Trump and you believe you’re going to get bad press no matter what, you can make everyone freak out [by keeping it secret] or you say you’re going to have a colonoscopy and people are going to make jokes about it, you’d prefer to have everyone in a tizzy rather than people have the image of him getting a colonoscopy,” the official said.

But Grisham herself had a different perspective on the incident. In retrospect, she writes, it was like much else during the Trump years: a missed opportunity to be up front with the country and educate the public about an actually important issue, in this case the benefits of detecting disease.

“I thought the American people had a right to know about the health of the president, and I still do. But I didn’t push the matter too hard,” Grisham wrote. “I think the president was embarrassed by the procedure, even though President George W. Bush had had the same one done when he was in office and had been very transparent about it.”

Dr. Mercola Says Americans Are “Rising Up” Against Big Tech

Kumbaya: We have a deal to raise the debt ceiling, Schumer and McConnell confirm