The Motive and the Opportunity 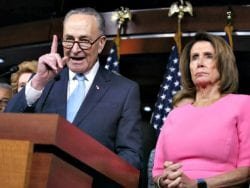 There is hardly a shortage of issues to talk about on the radio these days but what makes it complicated is that they’re all related. The plethora of new policies and executive orders all lead to the same ugly place.

Whether it’s to create gender confusion, de-fund the police or impose drastic measures they claim will supposedly change the weather, all are based on the view that America is a horrible country and law-abiding, liberty-loving Americans are horrible too.  Consequently, all must be made to heel to make way for a one-world, socialist/communist-controlled government. But like so many other tactics in the Left’s bag of tricks. the latter always precedes the former. They create the “crisis” and the hatred to justify their motive.

To speed them even further toward their desired outcome, it hasn’t been sufficient for them to attain the coveted trifecta of monopolistic power in Washington DC. They continue to devote as much time as ever to bullying and intimidating now private citizen, Donald Trump so as to make an example of him and threaten anyone else who ever supported or voted for him. This makes them look paranoid and weak but when you can succeed at governing against the consent of the people, who cares what they think?

The Left is now thoroughly unapologetic about their mission to drum all opposing views out of the public square. Their former pretenses to the contrary have been obliterated. That’s totalitarianism writ large and sadly, they’re getting away with it.

While the motives and ideas of conservatives are constantly and falsely attributed to racism and bigotry, most conservatives refuse to call their opponents’ motives into question at all. They prefer to do as they have always done, which is to systematically argue each issue on the merits and then move on to the next.

Conservative pundits virtue signal with fillers like, “I’ll take them at their word.”  or, “I’m sure they have good intentions.”  Leftists and their strategists on the other hand, never play defense. They are always on offense, especially when they’re guilty.

Impatience is rarely a virtue but sometimes it helps you cut to the chase. As the lights are going dim on our freedom of expression, we don’t have time to argue as if our opponents’ policies exist in a vacuum.  We must constantly question their motives and intended results, none of which are either unintentional or with the best of intentions.

The Motive and the Opportunity is original content from Conservative Daily News – Where Americans go for news, current events and commentary they can trust – Conservative News Website for U.S. News, Political Cartoons and more.

Trump Will Not Testify During Impeachment Trial