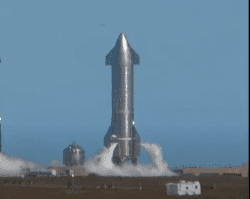 After a few canceled attempts to get Starship SN9 airborne for a 10km launch and landing test, private space company SpaceX launched the unmanned test rocket at 3:25 p.m. EST Tuesday afternoon. By 3:32, it was all over – literally.

Engine ignition, liftoff, ascent, hover, bellyflop, and descent went well, but during the flip to vertical just prior to landing, something went terribly wrong.

Two raptor engines are supposed to reignite for the landing phase. The reignition happens just as the rocket reorients to vertical flight. Here, you can see one of the raptor engines relight:

But when the second raptor attempts to light, it fails and some debris flies away from the engine area of the spacecraft:

SN9 struggles to get into the proper vertical alignment and experiences a colorful and rapid unplanned disassembly (CRUD):

SN9’s ‘hard landing’ is similar, but not the same as that of the ill-fated SN8 fireball. SN8 was unable to get proper fuel mixture to the engines resulting in sub-nominal landing thrust and a similar explosion.

The plume coming from the one raptor engine that did light looked normal and no second plume is seen prior to the crash which appears to show that only one engine lit which would not provide enough thrust to halt SN9’s descent.