The Trump-hating group the Lincoln Project was forced to admit to planning the Tiki torch stunt in Virginia.

The “white supremacists” who were pictured in front of Republican candidate for Virginia governor Glenn Youngkin’s campaign bus were actually Democrat operatives.

The stunt was reported by WVIC-TV reporter Elizabeth Holmes who reported the operatives said something like, “We’re all in for Glenn,”
as they formed up in front of the Youngkin campaign bus parked outside an event at a Guadalajara Restaurant in Charlottesville.

Of course, the usual people fell for the hoax.

Rep. Eric Swalwell(D-CA) tweeted this out blaming the GOP for what Democrat operatives did. 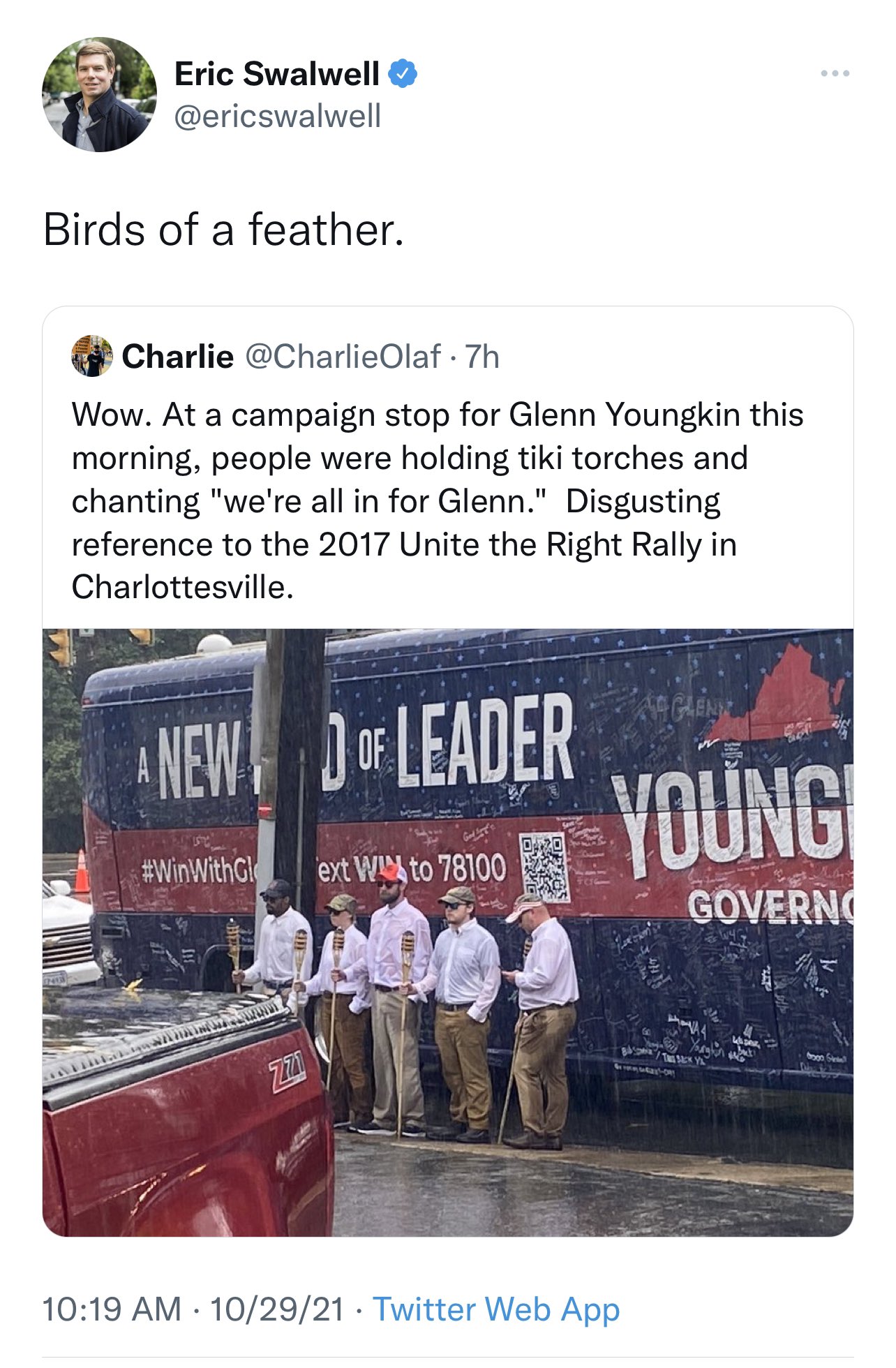 He blasted Eric Swalwell during a segment on his show.

It’s not surprising that @ericswalwell fell for today’s hoax. He’s not a very bright human being pic.twitter.com/a0QaxRPNlr

“One person in DC who fell hard for that hoax immediately was California congressman Eric Swalwell. You probably aren’t surprised to learn that. It is not a partisan point to note that whatever else he may be Eric Swalwell is legitimately stupid.

Some of his colleagues have compared him to a Labrador with a head injury. That doesn’t seem quite fair. There is literally no chance Eric Swalwell could ever find a tennis ball. He can barely remember to breathe. Our enemies know just how dumb Eric Swalwell is and they have exploited it. If you are a marginally attractive Chinese spy, for example, hoping to commit bizarre sex acts with an American politician in order to steal this countries secrets sooner or later you would end up at Swalwell’s place because it is just too easy.

This morning Swalwell was staring at the internet as he often is when he saw the picture of those fake Nazis in front of Glenn Younkin’s campaign bus in Virginia. Here is the amazing part.

A normal person looking at this, someone with an IQ over 70 might have paused for a moment and wondered, that’s funny what is a black guy doing holding a torch at a white supremacy event. That seems weird. But that didn’t occur to Eric Swalwell. He didn’t wonder about it, it didn’t seem weird to him it all seemed perfectly normal.”

The post Watch: Tucker’s Epic Roast Of Eric Swalwell After Hoax: “Labrador With A Head Injury” appeared first on The Gateway Pundit.